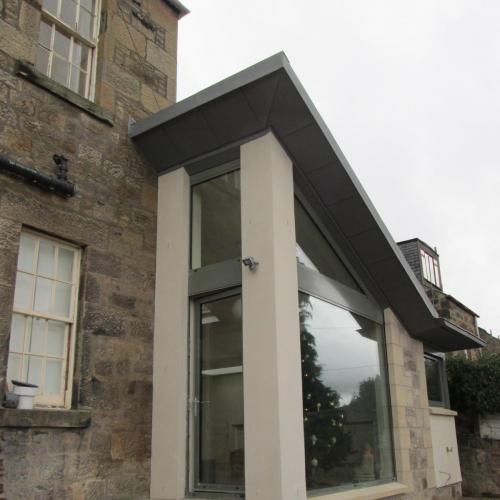 Our brief was to bring continuity to a series of spaces throughout the property over three storeys and to form a kitchen and living space. The building was originally a large single dwelling built in the 19th Century, but was sub divided into 2 dwellings. As the property was listed, the extension had to have little impact to the front elevation. Using the pitch of the side extension as a generator for the design, the new building was brought out and beyond the line of the original dwelling to the rear. An open plan kitchen and living space was formed at this level with a large picture window and high level glazing to the rear garden. Light was drawn into the previously dimly lit corridor area with roof windows. High quality materials such as sheet metal roofing and guttering, natural sandstone walling and aluminium windows were utilised.